Welcome to Craft For The World, the site that offers the best, modern and most beautiful patterns in the world of crochet! Now, nothing says the term “I love America” more than the red, white and blue American flag known worldwide. You can be proudly involved with this Afghan American flag that we will learn today. Did you know with this free crochet pattern from Wavy American Flag Blanket, a tip for you can make great gifts for members of the armed forces, also charities for veterans, and for those you love or even decorate your home with this beautiful flag. Today the flag that we will learn American 50 stars is a wonderful free crochet pattern for those who feel patriotic in our country. Today’s pattern is soft and cuddly and works quickly to make this beautiful flag.

The meaning of the flag of the United States is of extreme importance, since it is one of the most well-known in the whole world, both for the visibility that the United States has, and for the objects in its composition. The United States flag is made of thirteen stripes, seven of them red and six white, and all of them represent the thirteen colonies. There is also, in the upper left corner, a blue rectangle with fifty white stars, which make mention of all the states that make up the country. Among those represented are California, Texas, New York, Florida, Washington, Indiana, Arizona, Alaska, Louisiana, Colorado, and others. All the designs, features, and colors present in the flag are connected to the country, so the meaning of the United States flag is very strong and relevant to the nation’s history.

The United States flag has its origin from the war for freedom of the thirteen colonies. Under the leadership of George Washington, the troops that represented the United States in the fight against the English had the need for a flag, in order to stimulate the union of the soldiers in front of a national symbol. Intending to have the flag in hand soon, the American president asked the seamstress Besty Ross to make the utensil. After receiving the president’s suggestions, she made some changes, which were approved, giving greater relevance to the meaning of the United States flag. One of the proposed changes was to remove the flag of the United Kingdom and introduce the stars instead. There is not only the weight of patriotism imbued in the flag, as the symbol is considered one of the most beautiful in the world. The beauty lies in the arrangement of its colors and also in the symbolism it carries, which makes it even more eye-catching. Because of its great importance among Americans, there is a specific day to celebrate it, the Flag Day (celebrated on June 14). In addition, the United States anthem, a poem created by Francis Scott Key, entitled “The Star-Spangled Banner” has lyrics dedicated exclusively to the flag.

Understand the meaning of the United States flag – The meaning of the United States flag is present throughout its composition. The colors chosen, red, blue, and white, came from the flag of England. Each color shade found in the flag has a different meaning and helps perpetuate a part of the history of this great world power. Red is linked to resistance and courage, white has to do with purity and innocence, and blue symbolizes vigilance, perseverance, and justice. There are also some names that have been given to the United States flag, among them: Stars and Stripes, which means “Stars and Stripes”, Old Glory, which means “Old Glory” and Red, blue and white, which has as translation “red, blue and white”.

All the nicknames refer to the meaning of the flag of the United States. History: For a long time, the flag of the United States has undergone some kind of change. The stars and stripes, for example, were adapted by adding stars and updating the meaning. The stars grew larger as the states also grew larger. In 1960, the last star was added, representing Hawaii. The total number of stripes decreased from fifteen to thirteen. The flag that has more than fifty stars was the one proposed by President Eisenhower in 1959. Among all the 26 versions used, the last one, with fifty stars, is the one that has been in use the longest, exceeding the 57-year mark.

Let’s take a PDF step by step below, learn and create this beautiful Wavy American Flag Crochet pattern and we will also make the free pdf available for download below.

Craft For The World wants to thank Tracy Johnson, Highland Hickory Designs, The DIY Life Life and Red Heart for providing us with the complete pattern of this beautiful work, follow your step by step carefully and start your project, in addition to an excellent job. 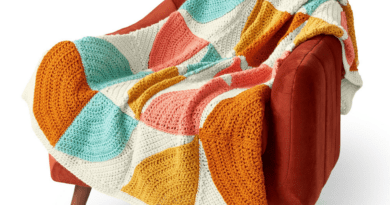 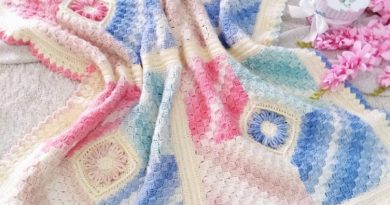