Warmly welcome to Craft For The World, the site that always brings news and the best patterns for you!! Let’s be honest, moms love accessories, so here’s a tip for a great gift for your mom. Well, this infinite scarf made with just one meter of soft cotton voile is an easy accessory that you can wear anywhere!! And it has fine French seams and an elegant 1/4 ” hem, making the pattern even more charming!! The fabric you can use is Birch Fabrics soft organic cotton voile, the voile is like quilted cotton, but lighter and more suitable for blouses, dresses and scarves… being perfect for this project, because the print looks almost the same on both sides; therefore, when your scarf spins and spins, it looks beautiful all the time. You can also choose to use another lightweight fabric, such as linen or rayon. This tutorial is based on a 44 ” wide screen. If your fabric is wider or narrower, adjustments will need to be made!!

An extra accessory can always be an ally to change your production. Do you know that “style trick”? The scarf can be the ideal third element for those who want to transform a basic look into something stylish without breaking your head. We can say that the scarf has a vintage look, but it has gained an air of modernity. Great divas of the past, such as Grace Kelly and Audrey Hepburn, had a scarf to call their own. They made history with their iconic scarves, combined with sunglasses of oversized proportions. Now, the accessory is back in the designers’ sights and has become a trend on the national and international runways. The brands reinvented themselves with the prints and they are gaining prominence in the fashion week presenting the summer 2019.

Worn on the head, neck, bags, and even as a belt, the scarf is the darling of the time and its versatility promises to make it last in the closet for many seasons. Heavyweight names in the fashion world like Gucci and Versace have firmly bet on the accessory, which has gained full prominence in the fashion weeks and we also saw at Minas Trend the stylist Fatima Scofield betting on this accessory. We tracked down the item that has dominated the catwalk and we will tell you how it came about. Scarves, just like clothes, have as their first function to protect the body. They can also be used following a fashion, as a religious veil, or as identification between people and their groups, their origins, tribes, social status, etc. Here are some interesting facts about this piece:

Queen Nefertiti is said to have been the first woman in history to wear a headscarf in 1350 BC. The type of headscarf that the mysterious queen of Egypt wore was known as a “khat”. – In 1261 AD belly dancing, danced in Egypt, brought the scarf as an accessory to the dance and to the costume of the dancer, who tied the scarf around her waist like a skirt. The gypsies wore and still wear scarves on their heads and tied around their bodies.
It is said that Queen Victoria of England and Princess Elena Meshcherskaya of Russia were two of the women responsible for helping to popularize the scarf as an accessory between the year 1837 and 1843. In 1837, the French brand Hermès (famous for its square and printed silk scarves) was inaugurated and although we find references about a greater popularization of scarves through Queen Victoria and Princess Elena, what is known is that the scarf fashion began to become really popular because of Hermès and this popularization began in 1930 in France, a country where fashion was traditionally for many, many years its biggest export product.

1. Cut the selvages from your yard of fabric (see photo above).

2. Then cut the fabric in half making two half-yard pieces (both pieces 18” tall and approximately 42” wide).

3. Pin the half-yard pieces wrong sides together along one short edge.

4. Stitch the seam with a 1/4” seam allowance. I used my 1/4” quilt piecing foot for this, but you could also follow the guides on your sewing machine.

5. Use a ruler and rotary blade or scissors to trim 1/8” away from the seam allowance.

6. Press the seam to one side, and then press right sides together with the seam along the edge.

7. Sew again with the fabric right side together and again a 1/4” seam allowance.

8. Now press your pretty French seam to one side. 🙂

9. Make two twists in your fabric, and place the remaining short ends wrong sides together. Sew another French seam, making a twisted circle of fabric.

10. Sew a line of stitching all around one long side of the scarf, 1/4” from the edge. It doesn’t matter if you sew on the right or wrong side.

12. Turn the folded edge over one more time and press.

13. Stitch close to the folded edge for a beautiful hem. Repeat on the other long edge and you’re done!

Optional hem technique – if you have a narrow rolled hem foot for your sewing machine, you could use it to sew a pretty hem too. 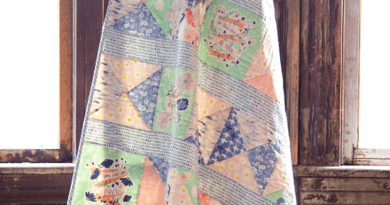 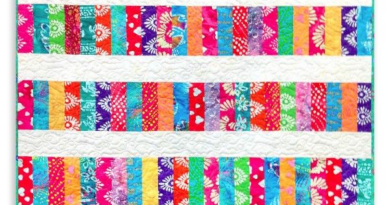